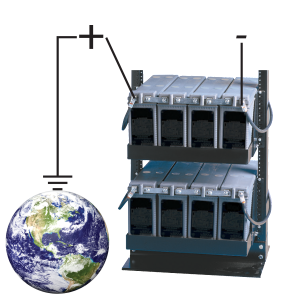 Why is the positive side of the DC circuit connected to ground in telecom applications versus negative ground used, as used, in automotive and other industrial dc systems?

Back in the day, when Telephony equipment was being developed, 48 was the chosen system voltage because it’s considered safe “low voltage”, and reduced amperage requirement of equipment powered at this voltage. This allowed use of smaller gauge wires, while still being capable of carrying power over long wire runs with minimum voltage drop as a percentage of the operational voltage. The early phone systems were configured as negative ground, however resulted in corrosion on the conductors caused by electrolysis when the + wires were subjected to moisture (you can see evidence of this condition on your car battery where the corrosion builds up over time on the + terminal post). To remedy this problematic condition, the systems were changed to positive ground and the destructive galvanic corrosion was eliminated by the cathodic protection provided by grounding the + side of the circuit.

This positive ground configuration does not cause polarity to change, plus (+) is still plus and carries a positive charge with respect to the negative (-) terminal or minus. Many a short circuits have occurred when installers assume that when changing to positive ground, polarity changes as a result, not true! Regardless of ground reference, connecting (+) plus to (-) minus will still result in either a short circuit or reverse polarity to equipment.

Another factor that can cause confusion (and potentially sparks) is use of red & black colored wires. In negative ground systems, red is universally understood as hot and +, in positive ground, this “red wire” is no longer hot, but is still +. So you can imagine an installer standing there with a black wire in one hand and red wire in the other looking at the input terminals on a “neg 48-volt” transmitter that are marked “HOT” and “RTN” asking himself “What goes where?” Answer is: black to plus and red to minus, which is a bit counter-intuitive. Thus, we recommend a common color be used for both conductors and the wires labeled with the polarity.

Another word of caution on system integrations that mix positive and negative ground equipment, Ground Isolation must be maintained between these operating system to prevent short circuits and equipment compatibility issues. In addition, there is the issue of continuity between chassis ground and system ground; they can be common or may be isolated (called a floating ground).

Newmar provides power systems that accommodate positive and negative ground configurations. Our technical staff is well versed in these applications and can provide guidance in configuring and wiring. Please consult with us should you have any questions about system configurations. We’re always here to help!