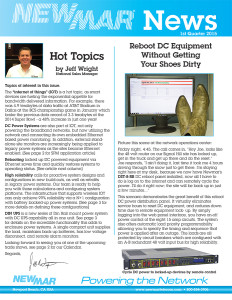 Hot Off the Press

View the digital online version of the 2015 1st quarter Newmar News for interesting news and information.

Topics of interest in this issue.

The “internet of things” (IOT) is a hot topic, as smart devices are fueling the exponential appetite for bandwidth delivered information. For example, there was 4.9 terabytes of data traffic at AT&T Stadium in Dallas at the BCS championship game in January which broke the previous data record of 3.3 terabytes at the 2014 Super Bowl – a 48% increase in just one year!

DC Power Systems are also part of IOT, not only powering the broadband networks, but now utilizing the network and connecting its own embedded Ethernet based power monitoring. In addition, external standalone site monitors are increasingly being applied to legacy power systems as the sites become Ethernet enabled.

DIN UPS is a new series of Din Rail mount power system with DC UPS capability all in one unit. See page 3 for details on the incredible functionality this adds to enclosure power systems. A single compact unit supplies the load, maintains back-up batteries, has low voltage disconnect, and remote alarm monitors.